Termites are a group of eusocial insects that live in colonies organized by castes. The following four characteristics typically define eusocial species.

This last characteristic indicates that all members have a different role within the colony. In the case of a termite colony, the caste system divides adults into three different categories: workers, soldiers, and reproductives. Due to the generation overlap, and a queen’s ability to produce eggs daily, mature colonies can contain anywhere from a few thousand to 1 million termites depending on the species. 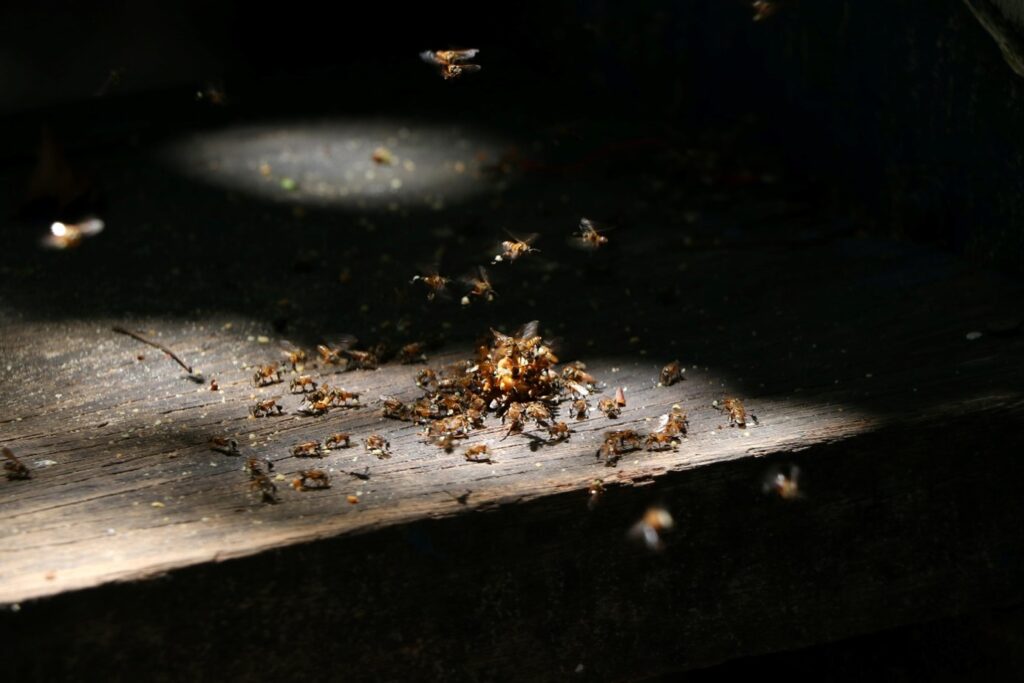 What do termites do?

The large numbers attributed to termite colonies easily explain the damage they can cause to wood structures in buildings or homes. This is because termites eat constantly, foraging tunnels in the wood and targeting the cellulose found inside. Although termites eat through wood and wood products, what they are truly after is cellulose. Cellulose is an organic compound found not only in wood, but in paper, cardboard, and cloth as well. While all termite species eat wood for cellulose, many of them also use the wood to create galleries, living inside. However, the constant need to eat may also become the downfall of these tiny pests.

Termites eat by way of trophallaxis, or the direct exchange of food or fluids from one member of a community to another. They specifically use proctodeal trophallaxis in which feeding occurs from anus to mouth. Using trophallaxis, queens and kings can transfer pheromones to larvae, signaling which roles to fill. And while this form of feeding helps the colony properly grow and thrive, it may ultimately lead to their downfall. This happens when workers who forage for food and feed the colony, return with treated wood or termite bait. Thinking they have found a reliable food source, workers will bring the deadly wood or product back to the colony, consequently feeding it to death. Due to their use of trophallaxis to feed, workers are capable of killing the colony from the inside out.

Termites in the US

There are thousands of different termite species found around the world, but only 45 can be found in the United States. There are three different groups used to categorize these 45 different species: subterranean termites, drywood termites, and dampwood termites. It is important to note that except for Alaska, every state is susceptible to termite infestations although some more than others. Depending on the region and thus the climatic conditions, the types of termites may vary. As their names might suggest, some termites require more humid conditions than others such as dampwood termites.

What are the most termite-infested cities in the US?

The concentration of termites in the US:

Although the lifespan of a termite may vary depending on its role, the life cycle begins during termite swarming season. During this period, male and female reproductives take flight to mate and establish new colonies. Once the two have mated, they settle down in a new nest and the queen may begin her primary role, producing eggs to grow the colony.

All termites begin with the same life cycle, moving through three key stages: egg, larva/ nymph, and adult. A termite queen lays eggs which then hatch into larvae or immatures. Termites will molt several times from this phase before developing into one of the three castes: workers, soldiers, and reproductives. The current needs of the colony and changes in hormonal levels determine the caste. The queen or king can release pheromones via trophallaxis to tell the larvae which roles to fill so they can molt accordingly.

Each caste has a specific role and responsibilities designed to help the colony thrive. Workers make up the bulk of a colony (90-98%) and are in charge of doing most of the work. They care for the larvae, gather food and feed the colony, and build shelter tubes. Soldier termites make up 1-10% of the colony and defend it using their large mandibles. The reproductives start to appear as the colony matures and becomes ready to expand. These termites will begin to grow their wings and prepare for swarming season.

After the eggs hatch, the larvae can begin to develop into workers, soldiers, or reproductives. However, sometimes termite larvae are capable of developing into a different caste type after their initial development. For example, worker termites either remain workers for their entire lives or they may molt into pre-soldiers, eventually becoming soldiers. Once developed into a soldier, a termite is no longer able to molt into another caste. Again depending on the colony’s needs, worker termites may also molt into nymphs to one day become reproductive termites.

From this nymph, stage termites may continue to become reproductives, or alates, while others may become secondary or neotenic reproductives. Neotenic or supplemental reproductives do not leave during swarming season, staying within the colony to mate and create more offspring. On the other hand, some nymphs begin to grow their wings like reproductives but eventually lose them to return to the worker stage.

Nymphs who molt several times and develop into fully winged, male or female alates are those who will attempt to expand the colony during swarming season. While one colony can produce a large number of nymphs (especially during mating season), many are unsuccessful in swarming season. This is because as they fly, predators eat them before they find a place to nest or outdoor conditions are too harsh.

What is swarming season?

Swarming season generally occurs during the warmer months when a termite colony is ready to expand. Hundreds of reproductive termites take flight, leaving their nests in an attempt to mate and establish a new colony. Those who survive, land and shed their wings, at which point they are called dealates. The dealates pair off and hunt for a location to start their new colony where they become the queen and king thus restarting the life cycle process.

Although swarming season happens when the weather is warm (and humid) this can vary from one termite species to another. Subterranean termites swarm starting in the spring through summer months when conditions are warm and humid. Drywood termite swarming season happens in the late summer to early fall months, sometime around August to November. Dampwood termites can technically swarm throughout the year but are typically seen in the late summer, from August to October.

It is important to know that swarming can happen both in and outside of the home. An indicator that termites have already begun infesting and that a colony is nearby is swarming experienced inside of the home. In this case, contact a pest management professional immediately to assess the infestation and any possible damage. 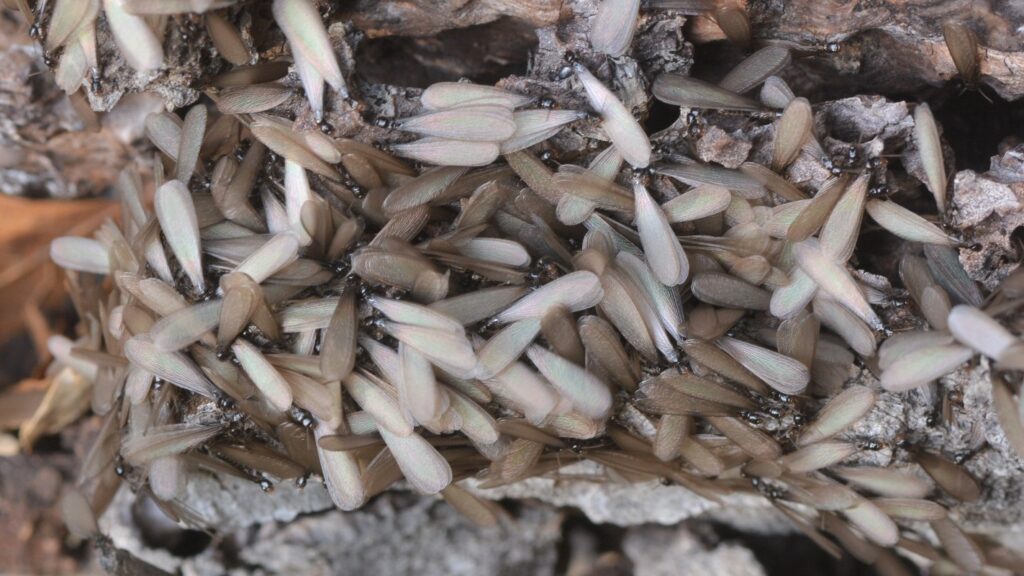